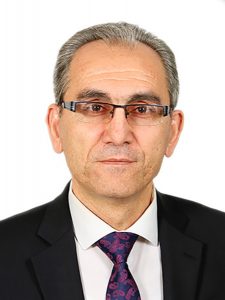 A.Sargsyan was born on January 10, 1957. In the village of Tsaghkashen, Aparan region, RA.

2014 – Candidate of Physical and Mathematical Sciences

2011 – Trainer of teachers subject to attestation of the general education institution.

From 1994 to present YSU Special School of Physics and Mathematics after A. Shahinyan, Head of the Chair of Mathematics, Teacher

2008 Co-author of a collection of math tests.

2008 Co-author of a collection of math tests and  problems.

In 2011 on Math. 2012 year. Guidelines for solving sections of the functions of the state final-joint exam tasks database (book I), equations and inequalities (book II).

In 2013, Math. 2013 Guide to solving the leveling sections of the database of state final and joint exam tasks.